The Affirmed Lounge Experience at the Kentucky Derby®

No doubt about it – the Kentucky Derby Museum came alive throughout Oaks and Derby days as it was reimagined into Affirmed Lounge.  Incredible food and delightful libations abounded as live music could be heard from every nook and cranny courtesy of the Levi Riggs Band.  Live racing from the track could be seen from nearly every spot in the museum, with televisions around every corner and races projected on the big screen in the Great Hall.

Guests weren’t just limited to live track coverage and live entertainment, though (as if that wasn’t enough) – they were free to wander the museum, too, with its many exhibits ranging from Churchill’s first electric gate to the brand-new American Pharoah exhibit!  The Triple Crown™ winner’s early years, connections, and racing career are on display along with artifacts never before seen by the public and exclusive interactive media. 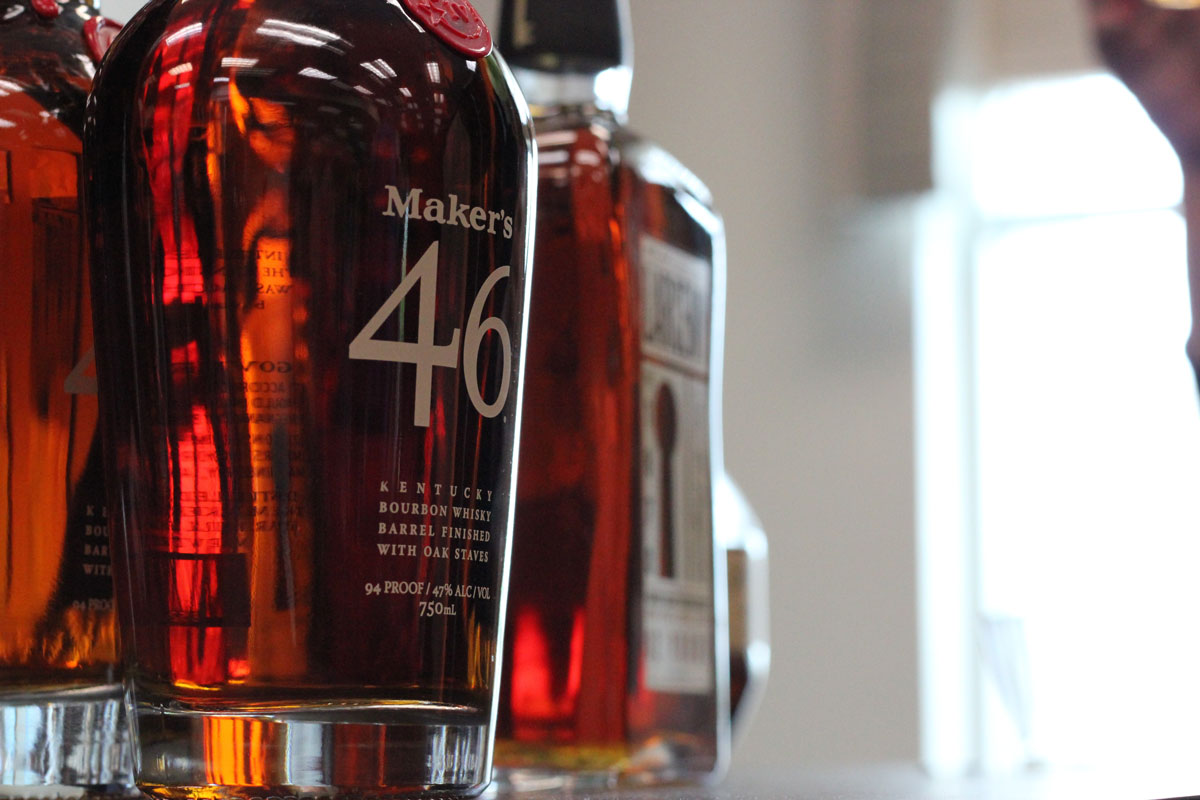 The Levi Riggs Band was in full effect on Oaks and Derby days, and we loved every minute.  Riggs, the frontman of the group, has a style all his own that’s reflects a simple, classic country vibe delivered with a ton of energy.  He’s opened for modern country headliners like Jason Aldean and Thomas Rhett as well as legends such as Travis Tritt and Jo Dee Messina.

Riggs is no country imitator, either – he draws much of the inspiration for his lyrics from his authentic rural roots, having grown up on his family’s Jersey dairy cattle farm in Indiana.  For the record, our favorite performance from Derby weekend had to be the Levi Riggs original (and his most popular single to date), “My Best Friend’s a Girl.” 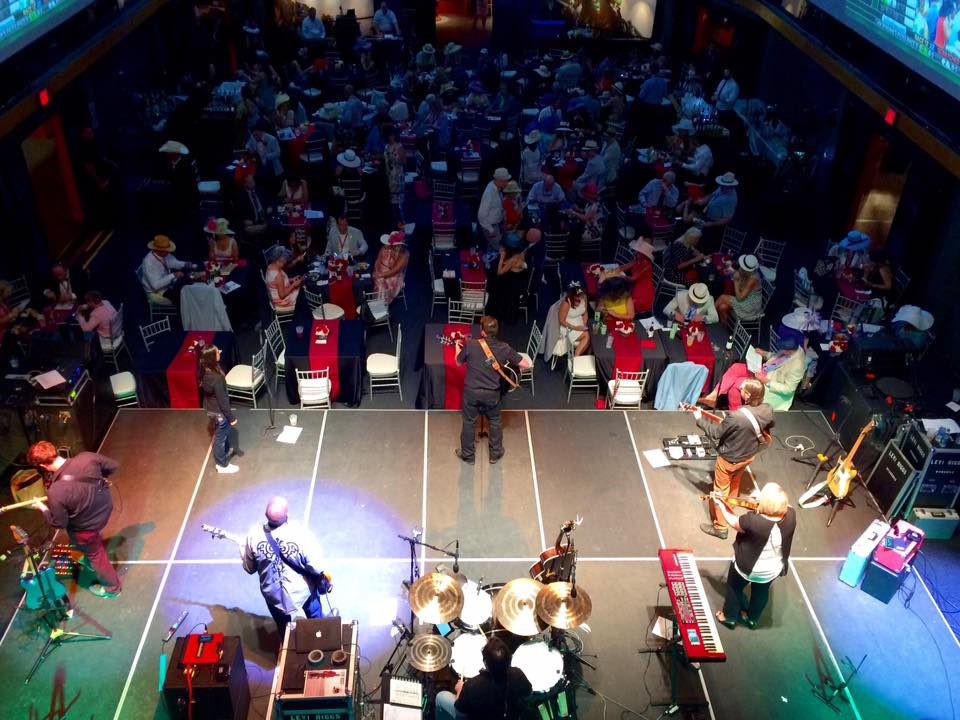 The Pro Football Hall of Famers

Easily one of the most talked-about events of the weekend was the appearance of three Pro Football Hall of Famers in Affirmed Lounge.  NFL legends Shannon Sharpe, Thurman Thomas, and Shannon Sharpe sat onstage and answered questions from the moderator in round table fashion.  These questions revolved around their life experiences and what they’ve learned over the years, but of course, their football careers played an integral part in many of their answers! 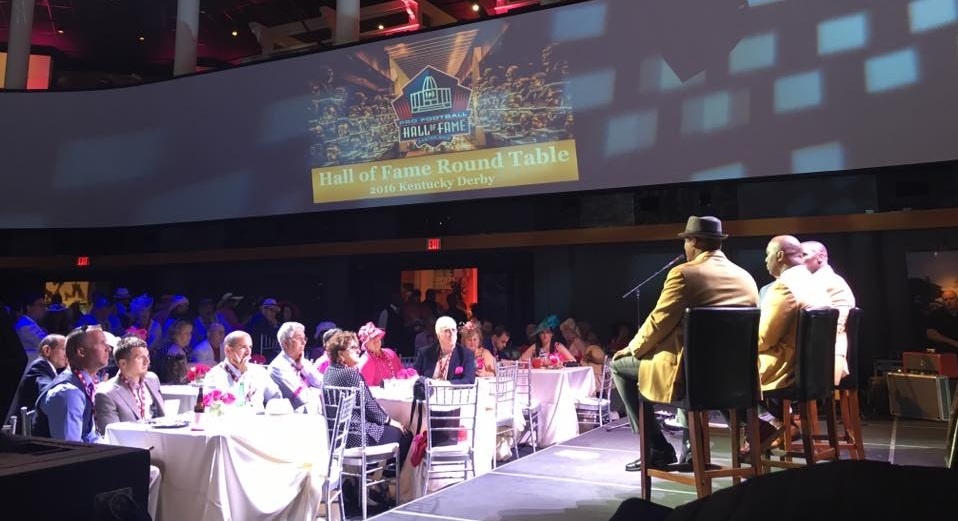 Affirmed Lounge saw visits from two legendary jockeys on both Oaks and Derby days!  Jacinto Vásquez, retired Hall of Fame thoroughbred jockey, had the pleasure of piloting two Kentucky Derby winners during his career – Foolish Pleasure in 1975 and Genuine Risk, a filly, in 1980.  Pat Day, a 1991 inductee into the National Museum of Racing and Hall of Fame and four-time winner of the Eclipse Award for Outstanding Jockey, rode nine Triple Crown™ winners during his career.

Both jockeys were available for photos with and autographs for guests.  Each appeared for approximately an hour each day to chat with guests about everything from their racing careers to their personal lives.  This was easily one of the weekend’s highlights! 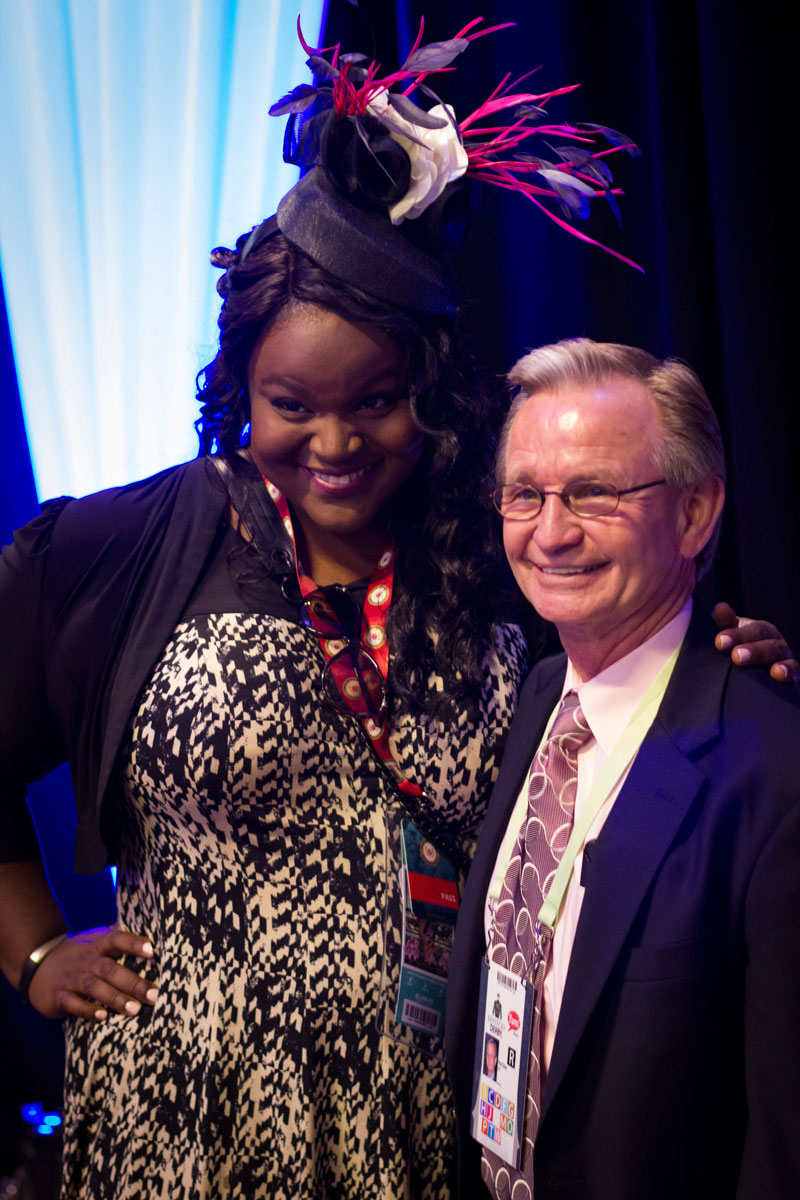 Incredible food graced the tables of Affirmed Lounge at midday.  Shrimp and grits, Caprese salad, gourmet mac and cheese…delicious, filling fare was guaranteed to be available buffet-style from 11am to 2:30pm each day.  Beverage stations were dotted throughout the venue, offering an array of cocktails, beer, wine, and soft drinks.  Guests filled up their plates and glasses as they pleased, then took in the races while they enjoyed food, beverages, and live music.

Trays filled with light hors d’oeuvres arrived at 3pm, ensuring that no guest went hungry as the day went on.  One of our favorite culinary features in Affirmed had to be the gourmet ice cream cart manned by the small-batch specialty ice cream experts of Louisville Cream, Darryl Goodner and Zach Hardin.  Flavors like bourbon and sweet cornbread were all swirled into the creamiest, most flavorfully abundant ice cream we’ve ever tasted…and we may have sampled more than we should’ve.  No regrets!

For more on Louisville Cream, a local business unique to the Louisville area, check out this Courier-Journal article. 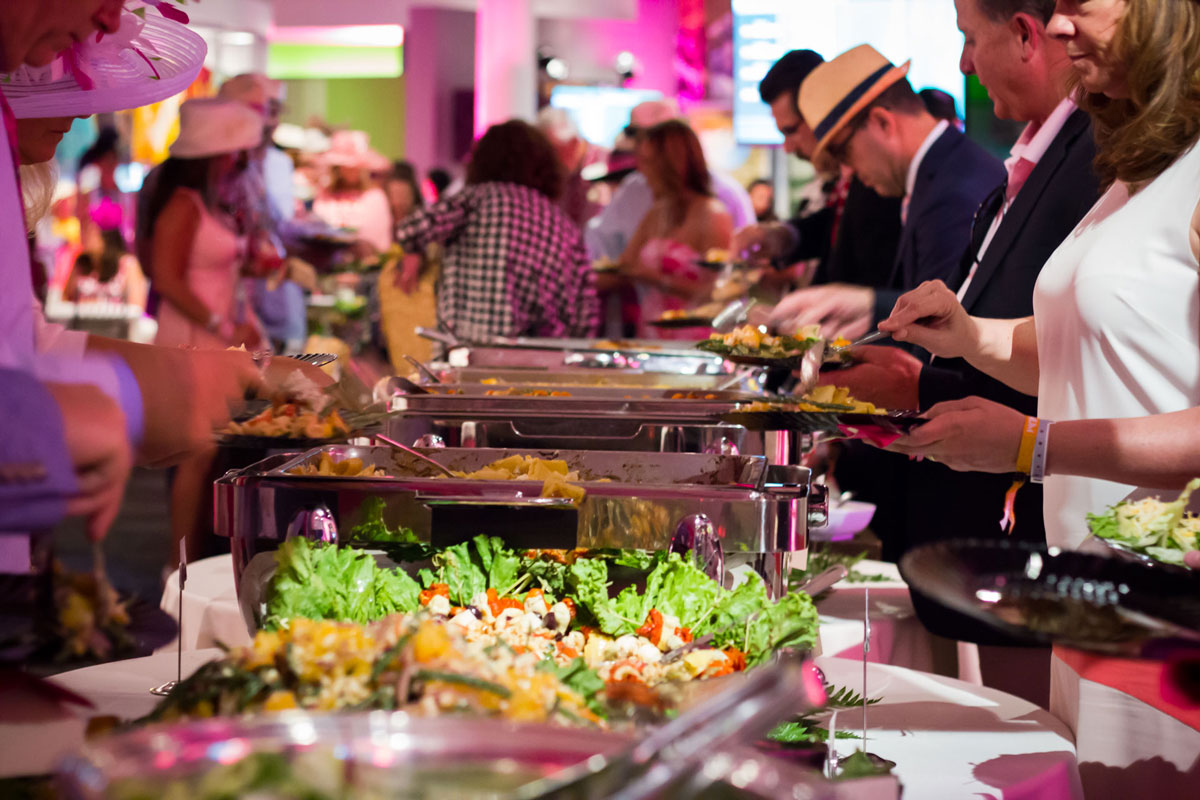 One of the most popular sections of this venue was the Bourbon Lounge located on the upper floor (in the Carl F. Pollard Gallery), which provided heavy-handed pours of the finest Kentucky bourbon and whiskey as well as an array of smoked meats.  This was the coolest space at the track – not just because it was popular, but because it maintained a brisk climate that was a welcome change after walking inside from the heat outdoors!

Revel in the atmosphere of Affirmed Lounge with Grandstand Orange ticket packages, which also include access to the Taste of Derby Party on Thursday night.  At Taste of Derby, you’ll mingle with celebrities and masterful chefs on the eve of the Kentucky Oaks while sampling specially-prepared delicacies and enjoying live entertainment.  Grandstand Orange tickets offer open-air box seating with elevated, third-floor views of the starting line and final stretch to ensure that you’ll be right at the heart of the action for “the most exciting two minutes in sports.” 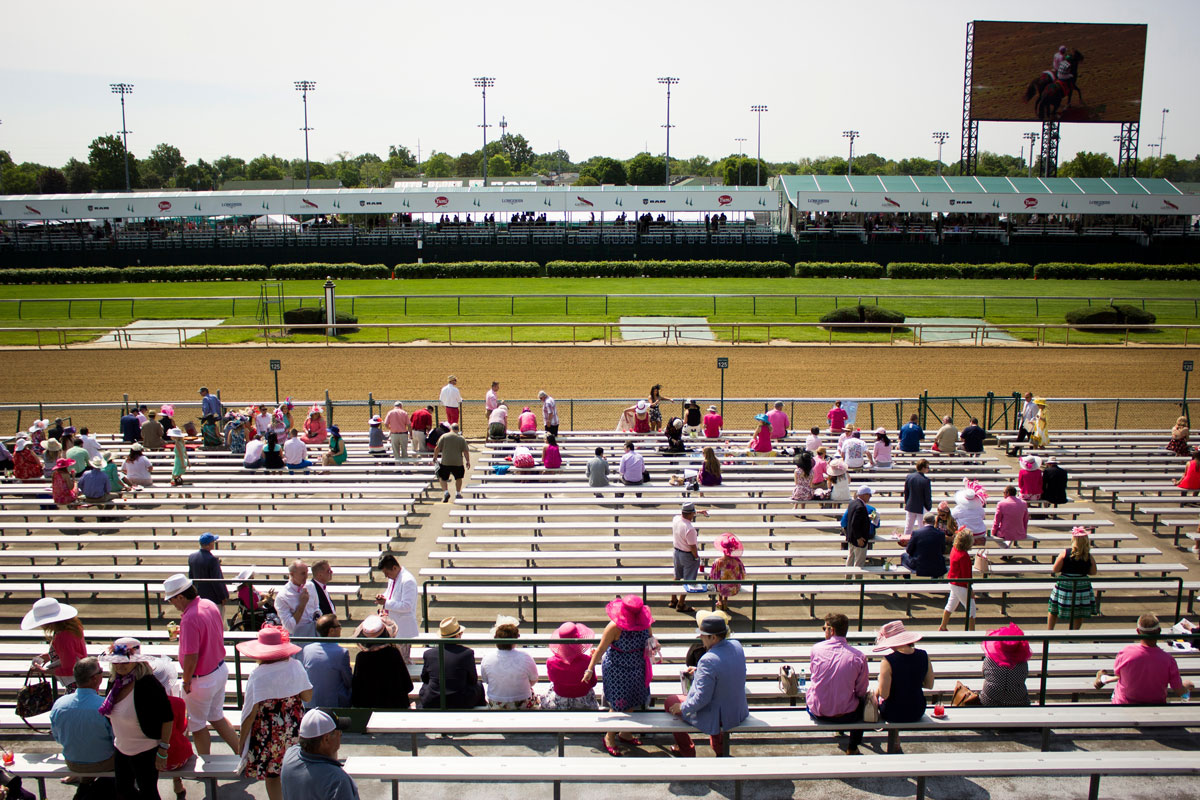