Fashion Through the Decades at the Kentucky Derby®

The Kentucky Derby® is “the greatest two minutes in sports,” but the fashion that surrounds the event lasts much longer. From hats to gloves to dresses to suits, since the inaugural race in 1875 the outfits have significantly changed but no matter how long the hemline or how big the hat, one thing that has stayed the same is attendees pull out all the stops for this elite event.

Women attending the Kentucky Derby® from 1875 to 1920 wore modest dresses down to their ankles with fitted or loose jackets. The hats were very simple with no rim and it was custom during that time for women to wear gloves. Many women also wore silk to stay cool from the warm weather. Men kept it classic with a nice tailored suit, simple yet elegant.

This time period was not very different from the one before. However, it became more popular for women to wear suits rather than dresses. The hats began to have more character and more women started wearing fascinators, a decorative headpiece secured with a comb or hairclip. Men did not stray from the fitted suit.

The fifties were post-war America and the fashion mimicked just that. Well-dressed society women were referred to as chic and wore fitted suits or dresses that were securely fitted at the waist. A much tighter look than previous decades. The dresses were raised from ankle length and stopped just below the knee, showing more skin than usual. Gloves and hats were still traditionally worn.

The rules of modesty in past decades were dwindling when the 1960’s rolled around. These rules which guided somuch of the culture in the early 20th-century did not fit the views of people in the 1960’s. The Kentucky Derby® was still seen as a respectable event and women dressed as such. However, with the opening of Millionaires Row, society women put more time and effort in selecting the perfect hat for the occasion. The hats became louder and posed more of a statement than ever before. The formality of gloves did not fit the new found culture of the 60’s. Women were becoming bolder with their outfit choices and began wearing brighter colors, patterns and prints to make even more of a statement. Hemlines were still on the rise, showing a much less modest look than ever before.

Just like that, the long skirt was a thing of the past. Women were now wearing dresses that were a few inches above the knee as opposed to down at the ankle just 50 years prior. Hats and gloves were no longer needed accessories for women as they were making more of a statement with their hemlines. Exposed shoulders gave off more of a casual, relaxed look by many. As the eighties began, the prints and colors got even brighter and bolder. Spectators both men and women alike, were pulling out bigger, more extravagant tricks. Men wore patterned suits with stripes or plaid, and women wore bigger jewelry, statement colors and painted on make-up heavier than ever. It was a time where people were dressing to be seen and get noticed. The hats slowly made a comeback but the clothes were the focus of this time. 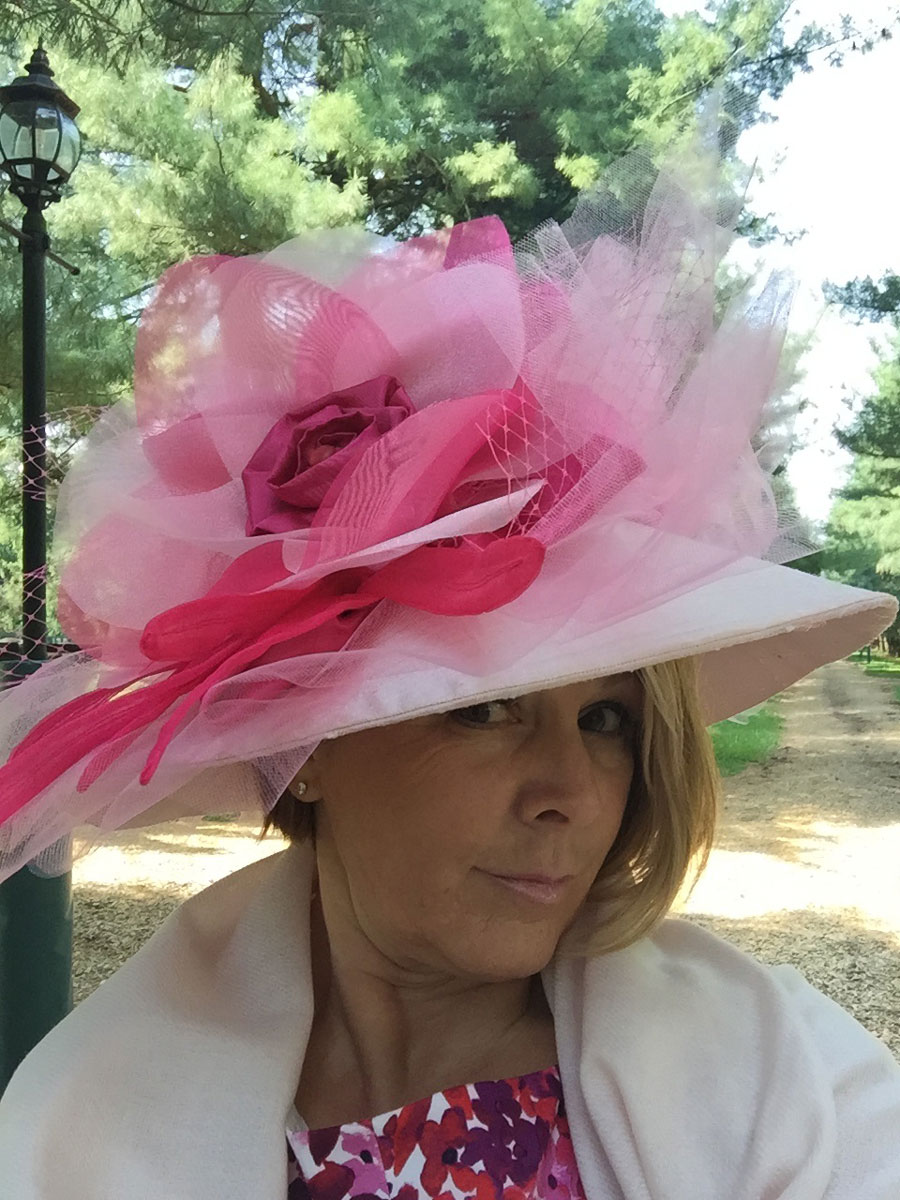 Going back to their roots, dresses began to take precedent over suits but no such luck for gloves, they stayed in the 40’s. Hats, however, came back with a bang and were bigger than ever. Women began to spend a fortune on the perfect hat and most added a flower or feather accent. Pearls became a trending piece of jewelry for this time and most women wore elegant pearl necklaces or earrings. Pink seemed to be the color to wear to the Derby in the nineties. Spectators in the infield enjoyed a more casual look, wearing dresses, cotton shirts and it became more popular for both women and men to sport shorts. 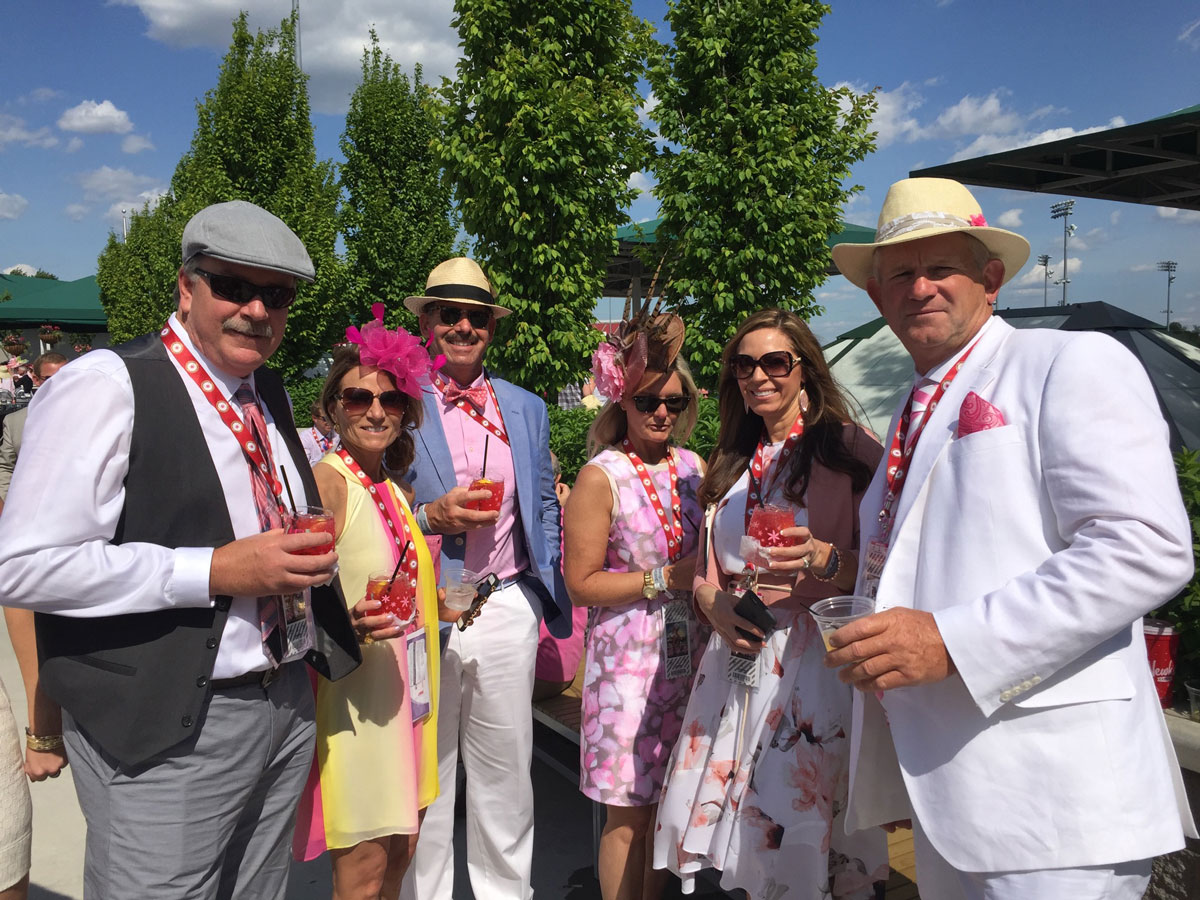 In the new millennium, the hats became the focal point of all outfits on everyone, including men. Between 2010 and 2012 the bigger the hat the better. After that, the hats got smaller but audacious by adding flowers, feathers, ribbon, you name it, to their hats. There is a solid mix between hats and fascinators, but neither makes more of a statement than the other. It is custom to wear a simple dress, either solid or patterned, but not too loud that it takes away from the hat. Wearing a hat is said to bring good luck to the race which encouraged men to begin wearing hats.

The Kentucky Derby® is a fashion event where, contrary to earlier decades, there are no rules. The bigger and bolder, the better. It is a chance to showcase your personality and have fun with the outfit you wear. The Derby is a place to see and be seen, so why not have an outfit to match?

If you missed the chance to pull out all the stops at this years Kentucky Derby®, Derby Experiences Official Ticket Packages for 2018 are now available! As Churchill Downs’® only Official Partner, these packages include exclusives and extras you can’t get anywhere else. From Premium to Clubhouse to Grandstand, Derby Experiences truly provides the best options when it comes to buying your Derby tickets. Create an all-inclusive experience for you and your group by adding hotel, travel and accommodations to ensure an unforgettable, unmatched experience!