One of the most fantastic things that comes along with attending the 2015 Kentucky Derby is the parties! The Kentucky Derby is one of the world's most reknown horse races and it draws in a fan base of horse racing icons, professional athletes, Hollywood stars, musicians, other A-list celebrities, and YOU!

Then the second annual Fillies & Lilies Party presented by Derby Experiences is the Kentucky Derby party for you!

Held in the Kentucky Derby Museum attached to Churchill Downs immediately following the 141st Kentucky Oaks, the Fillies & Lilies Party features a live performance by Sara Evans with lenty of celebs in attendance.

1. Pick Your VIP Access at the Fillies & Lilies Party

Guests had a fantastic time at the first annual Fillies & Lilies Party featuring Wynonna Judd last year, and all of us at Derby Experiences received fantastic feedback which has allowed us to step the game up even more this year with three different levels of access!

With General Admission to the Fillies & Lilies Party, you'll receive a ticket to the party where you'll find Sara Evans performing her greatest hits LIVE and magician Matthew Furman thrilling you with his latest assortment of magic tricks and illusions. A-list celebrities will also be in attendance! 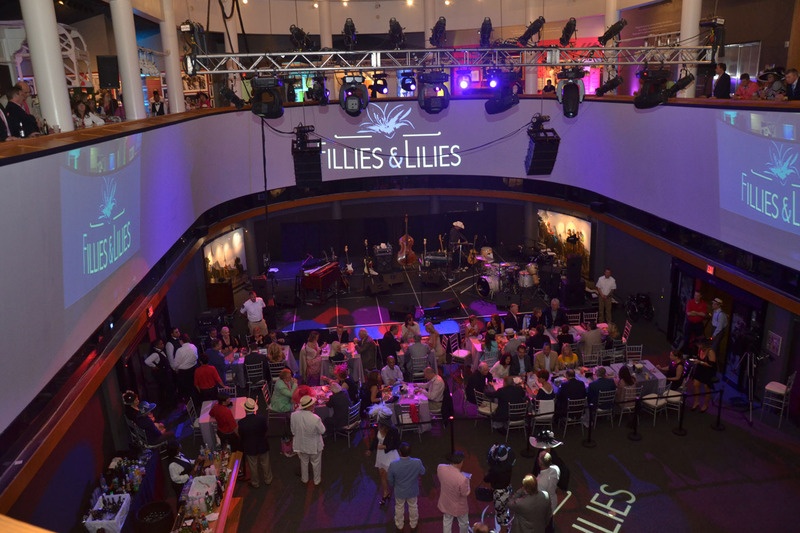 While you're dancing the night away and mingling with stars, you're also invited to enjoy complimentary heavy hors d'oeuvres with action stations, a premium open bar and a bourbon lounge.

With VIP Access, you'll have all the perks of general admission, but you'll also have a reserved table of four in the second row for Sara Evans' performance! Kiss the standing area and second floor level good-bye and sit stage side!

Want even more access? Opt for Ultra VIP Access at the Fillies & Lilies Party! Again, you'll have all the amenities as general admission, but you'll have a reserved table of four in the first row, cocktail servers to take care of you during the concert, a special gift at your table, and you'll be able to meet Sara Evans!

Once you decide the level of access you're seeking at the Fillies & Lilies Party, it's time to take the next step.

2. Decide on Just Tickets or a Party Package

Tickets to the Fillies & Lilies Party grant you just that; an invite to the party. You'll receive all the perks of being at the party, but you won't have any exclusive access at the Oaks or Derby.

This means you'll receive tickets to both race days with seats located in the third floor of the Grandstand, the newest seating area in Churchill Downs. This offers prime views of the starting gate, the first turn, the last turn, the final straight, and the finish line. And when the horses are out of your direct line of sight, you'll have the world's largest HD video board right in front of you streaming the backstretch.

Within Sunny's Halo Lounge, you'll find a complimentary one-time lunch buffet, open beer, wine and soft drink selections, a cash bar for premium beverages (you have to get your fill of Mint Juleps, am I right?), and snacks available for purchase.

Celebrity jockeys and A-list stars will also be making appearances in Sunny's Halo Lounge to meet YOU and you'll receive a VIP Fast Access Pass allowing you a quicker, more secure entrance to Churchill Downs on race days.

Now, if you decide you only want tickets to the Fillies & Lilies Party, your steps are complete! You're ready to go forth and have the time of your life at Derby Experiences' Official Kentucky Derby Party!

However, if Fillies & Lilies Blue Grandstand Party Packages are the fit for you, then move on to step three!

Time for the final step of creating your Fillies & Lilies experience, and this step only applies for those who opt for party packages. It's time to select your add-ons!

As with any Official Kentucky Derby
Ticket Package, you can opt to include luxurious hotel accommodations in the Louisville area and transportation to and from Churchill Downs each day in your package.

This eliminates the planning process on your end as you won't have to rent a car and it helps you avoid sky-rocketed hotel prices at the last minute.

Plus, Derby Experiences offers easy payment terms allowing you to bundle everything together and pay over a period of months instead of all at once! It's a win-win every way you look at it. You're able to have your dream Kentucky Derby experience while keeping it very affordable.

Start Your Fillies & Lilies Experience at the 2015 Kentucky Derby!

Get more information on 2015 Fillies & Lilies tickets or on Blue Grandstand Party Packages by calling 1-888-384-7088 or by visiting Derby Experiences website. You want to make your Derby dreams come true and we want to help you do it! It's time to check the 2015 Kentucky Derby and the second annual Fillies & Lilies Party off your bucket list!

Join the conversation on social media using the hashtags #FLParty and #DerbyVIP!