With prep race season over and the final preparations and training rounds coming to an end, it's time to start talking about results.

Twenty horses will line up at the starting gates at Churchill Downs on May 4, but only one will be deemed worthy of the Garland of Roses awarded to the victor. Thanks to a wild, eight-month ride in the Road to Derby Qualifying Series, the field is the most open it's been in recent memory, with several 3-year-old's having a legitimate claim as the best in the group.

But for bettors and fans, it all comes down to what happens between the starting and finishing line. While the Derby is often a gamble, we've highlighted the top contenders and come away with a prediction of who will kick off Triple Crown™ season with a win.

Here are our favorite horses going into the 2019 Kentucky Derby. 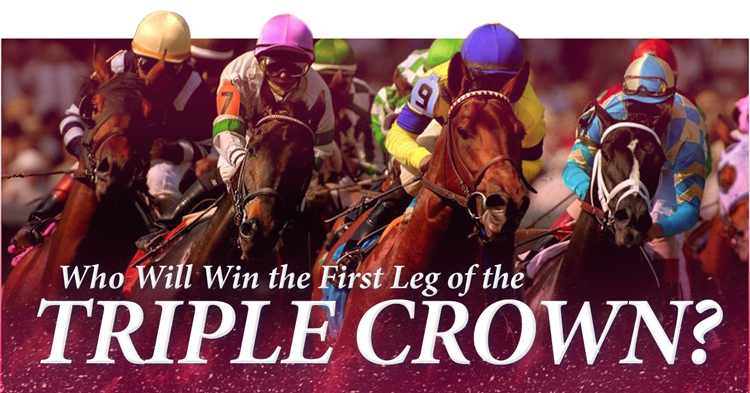 There's no doubt about it — Omaha Beach is your favorite for the 2019 Kentucky Derby.

Richard Mandella's star colt carries the most momentum heading into the biggest race of 2019, winning the second division of the Rebel Stakes in March and the Arkansas Derby on April 13.

But the news that swayed the masses towards Omaha Beach's Derby contention came just two weeks before the race when jockey Mike Smith, who rode Justify to the Triple Crown in 2018, announced that he would be atop Omaha Beach at Churchill Downs.

Smith said his decision to ride Omaha Beach was thanks to the horse's ability to adapt to any track conditions, especially with the unpredictable weather in Louisville over the past couple editions of the Derby.

Mike Smith he decided on Omaha Beach because he has already beat two of Baffert's big horses, Game Winner and Improbable. "(Omaha Beach) seems to be getting better, seems to be the 'now' horse. I hope we're right."

The Hall of Fame jockey also doesn't succumb under pressure — Justify came into the 2018 Derby as the odds on favorite and Smith didn't let the hype or pressure deter him from a spectacular 2-minute run.

Bob Baffert will have three horses lined up in the starting gates at Churchill Downs on May 4, but which one is most likely to bring the Hall of Fame trainer another Derby win?

As the Derby inches closer, the answer looks to be Roadster.

Undefeated as a 3-year-old, Roadster is coming off the most impressive performance of his career with a first-place finish in the Santa Anita Derby on April 6. This race saw Roadster fall behind the pack early, only to surge back in the final stretch to usurp fellow Baffert-trainee and Derby contender Game Winner.

The victory makes Roadster the only Baffert trainee to win on the Road to Derby in 2019, turning all eyes to him as the favorite among the trainer's stable.

The horse has only raced in California, though, leaving a lot of questions about his ability when he makes his first run in Louisville.

Many, including us, pegged Game Winner to be one of the favorite's at the 2019 Kentucky Derby before the turn of the new year.

While he's still among our handful of potential contenders, the confidence in the colt's ability has diminished slightly in the lead up to the Derby.

But here's the catch — Game Winner has only disappointed as the former golden child of trainer Bob Baffert. For any other horse and trainer combo, Game Winner's two second place finishes on the Road to Derby would be an accomplishment worth writing home about.

With the immense pressure that comes from being a Baffert horse, the performances of Game Winner have left something to be desired.

Baffert still believes in the colt, though, and has claimed that Game Winner may be the most physically gifted out of his current roster even if he doesn't carry the most momentum into Louisville.

Game Winner has proven that he can go the distance, so now all he has to worry about is proper energy usage throughout the entire 1 1/4-mile length of the "Run for the Roses."

Tacitus heads into Churchill Downs as one of the favorites to claim the Garland of Roses after topping the competition in the Road to Kentucky Derby series.

The William Mott-trained colt burst onto the scene on March 9 with a thrilling win in the Tampa Bay Derby, setting the stakes record with a 1:41.90 time. The victory earned Tacitus 50 points on the leaderboard and immediately threw his name into the hat of top Derby contenders.

Less than a month later, Tacitus claimed the top spot on the leaderboard with a 100-point victory in the Wood Memorial at Aqueduct. This performance was the 3-year-old's most impressive on the trail to Churchill Downs, as he charged back from 10 lengths back to claim the victory and the high prep races points.

Even with the highest amount of points, Tacitus isn't the favorite heading into the 145th Derby. This is due to the fact that history is not on his side. In the six previous year of the Road to Kentucky Derby qualifying series, only twice has the Road to Derby points leader won the Derby — Orb in 2013 and California Chrome in 2014.

Baffert's final horse in the Derby, Improbable, has the biggest chance to surprise onlookers on May 4.

While considered the least likely victor out of Baffert's trifecta, there's still hope for the colt to push himself into contention at Churchill Downs.

Improbable finished his run on the Road to the Derby with second-place finishes in both the Rebel Stakes on March 16 and the Arkansas Derby on April 13.

While he was upset by Long Range Toddy in the Rebel Stakes, Improbable's run in the Arkansas Derby supplied ammunition for believers in the 3-year-old colt. Improbable finished Derby favorite Omaha Beach, but showed promise and the ability to compete with the horses that he'll line up with on the first weekend of May.

As one of the lightest-raced horses in the starting gate, there's belief from Improbable's camp that the horses best is still to come.

If there is one mark against Improbable, it's his finish at 11th on the Road to the Derby standings. The lowest ranking horse to ever win the Derby was Justify, who finished the qualifying series at 9th in 2018.

This race is Omaha Beach's to lose. The colt carries with him the perfect combination of momentum, confidence and successful jockey to make anything but a first-place finish a disappointment to the bettors and attendees at Churchill Downs.

While Baffert has ruled the track in recent history with both American Pharoah and Justify, Richard Mandella has a certified winner on his hands that has proven worthy of all the praise he's received. While this won't be a Secretariat-esque blowout, expect Omaha Beach to outlast the field and leave Churchill Downs decked in a garland worthy of a champion.

Get an Official Ticket Package to the 2020 Kentucky Derby